Top
×
You are here: Home / Blogs / Should Vines and Climbers Always Be Removed from Trees? 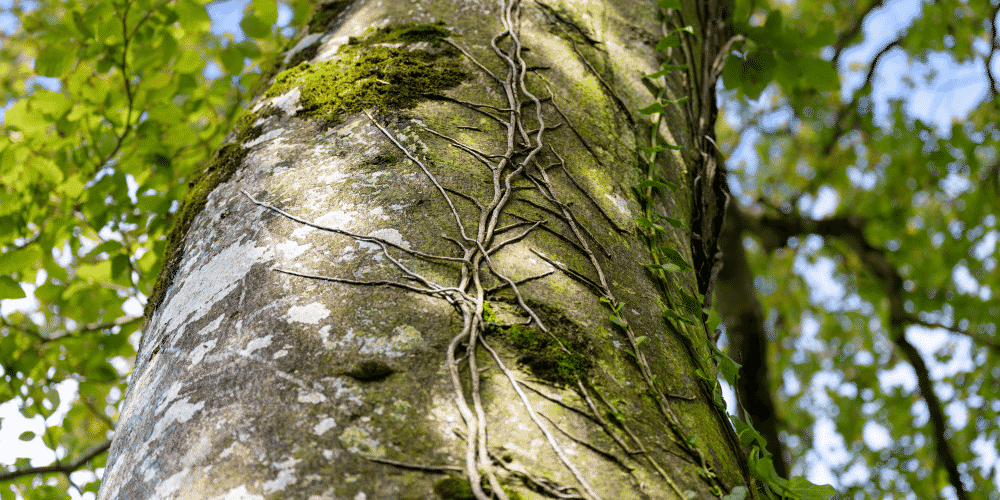 During the course of routine inspections, you’ll often notice trees harboring a veritable coat comprised of climbing vines. Sometimes, the homeowner or property manager will request that you remove them, but at others, you may make such a suggestion yourself.

But is this always a good idea? Should climbers and vines always be removed from the trees on which they grow?

Historically, most arborists and tree-care professionals would default to removing this type of vegetation, but that’s not always necessary or even desirable. In practice — like so many other aspects of tree care — the right answer will vary from one situation to the next.

Ultimately, you’ll have to consider a variety of factors and use your professional judgement to arrive at the best answer. We’ll discuss some of the most important criteria you’ll want to consider below, in an effort to help make these decisions easier.

The Overall Health and Vigor of the Tree

Often, vine-covered trees will already show signs of decline, such as crown dieback or premature leaf drop. If these symptoms are relatively mild, you may – after considering the factors we’ll discuss below – be able to leave the vines as they are. However, if the tree has lost all of its leaves months before the fall, or large portions of the crown are dying, you’ll likely have to remove the vines and hope the tree recovers. In extreme cases, you may find it wisest to simply remove the entire tree.

Generally speaking, vines tend to grow in areas with plenty of rainfall, so they don’t often present a fire safety hazard. However, if you’re working in a region in which wildfires are a threat, it’s imperative that you consider the likelihood that they’ll present fire-safety issues.

Vines can provide an exceptional quick route by which fire can ascend a tree, where it’ll reach the canopy. This elevates the fire danger to an entirely new level, which will present risks to people, structures and other trees.

Typically, in fire-prone regions, it’ll be wise to err on the side of caution and remove the vines.

The Species in Question

Sometimes, it’s easy to characterize a species as desirable or undesirable, but in other cases, you’ll need to take your client’s desires into account. For example, most homeowners will want the poison ivy growing up their pines removed. Conversely, homeowners may differ in their tolerance of vines like Virginia creeper; some may enjoy its fall color and general appearance, while others may prefer to keep the trunks of their trees free of vines.

Once you’re satisfied that the tree is in good health and the vines are both fire-safe and desirable (if they’re not, you needn’t consider anything further, simply add the removal to your invoice and get to work), you’ll want to consider any wildlife issues the vines are presenting.

Vines often serve as an important resource for rodents, birds and bugs. Lizards, snakes, frogs, spiders and other “creepy crawlies” frequently inhabit vines in warm climates too. Some will live amid the foliage, while others will feed on the fruit or flowers the vines bear.

But the resources the trees provide needn’t be your primary consideration. You must simply determine if the wildlife the vines may attract are desirable or not – just as you did with the vines’ identity themselves. And this too will vary from one client to the next.

Most clients will probably want vines removed that are harboring rats, wasps or ants. But opinions about things like lizards, frogs, bees and bats may differ markedly. Accordingly, you’ll simply need to let your client make the call.

By this point in your decision-making process, the only thing left to consider is the client’s aesthetic wishes. If the vines are not creating a problem (like those discussed earlier), you needn’t remove them unless the homeowner or property manager simply dislikes their appearance.

However, before simply acquiescing and starting the removal process, you may want to recommend pruning the vines to provide a neater appearance. This can even help improve your bottom line in the future, as the client will need to have you return and prune the vines again at some point in the future.

There are certainly benefits and drawbacks to the issue of vine removal, and as you can see, they’ll vary from one situation to the next. Unfortunately, this means there are no cut-and-dry cases – you’ll simply need to consider the criteria above and make the best decision you can on behalf of the client, your crew and the tree itself.

Learn why TreePro is the largest tree care insurance program of its kind. Click here!