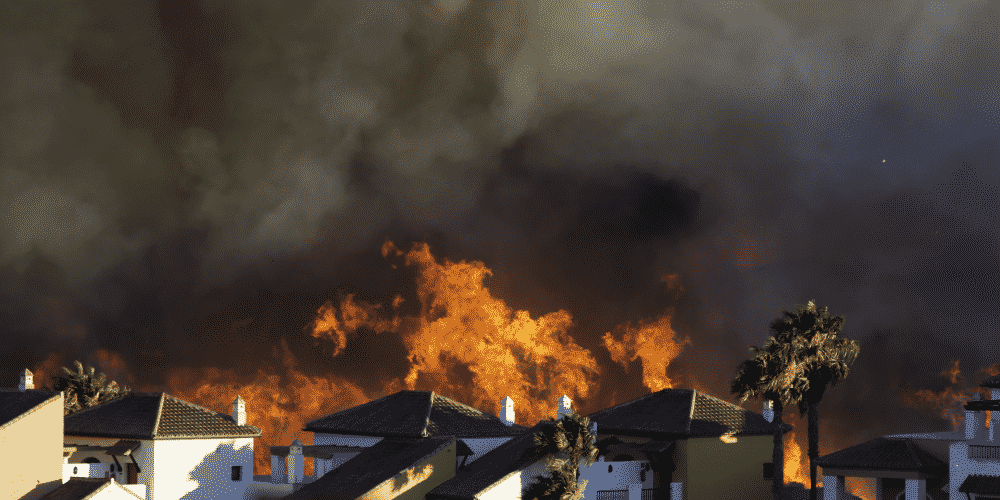 In Northern California, hot, dry winds that blow downslope from the northeast were causing wind gusts up to 40 mph.  In Southern California such winds are called ”Santa Anas” and are closely associated with severe fires; in Northern California they are called “Diablo” winds.  They blow along ridgetops and down the lee side of mountains including the coastal range of northern California as well as the western slopes of the Sierra Nevada.  These winds can blow in either spring or fall, but they are most dangerous in the fall when vegetation has dried out over the long summer and the fall rains have not yet arrived.

In California this situation arose on October 8, 2017.  The Nuns fire was ignited when a tree top broke off and hit a Pacific Gas and Electric (PG&E) power line, knocking it into a dry grass field and setting it ablaze.  It started a fire that burned 56,566 acres, destroyed 1355 structures and damaged an additional 172, and caused 3 fatalities.

Another fire nearby that night, the much-larger Tubbs Fire, burned 36,807 acres, destroyed 5636 structures in two counties, and killed 22 civilians.  The fire investigation eventually put responsibility for the Tubbs fire on a private landowner’s electrical grid sparking into vegetation.

A year later, on November 8, 2018, strong Diablo winds pushed the Camp Fire as it destroyed the town of Paradise, CA.  Faulty PG&E equipment sparked a fire that ultimately burned 153,336 acres and killed 85 people, the deadliest and most destructive fire in Californian history.

Fire investigators determined the Camp Fire originated from a high-voltage transmission line arcing when it touched a steel tower. Normally the lines are kept from touching the steel towers by insulator strings on “C hooks” that keep them apart, but the one on this tower was very worn after 97 years in the windy Feather River canyon.  The “C hook” failed, allowing the energized line to touch the tower.  This showered molten aluminum and steel onto dry brush at the foot of the steel transmission tower and caused it to ignite.

Additionally, a fallen Ponderosa pine tree was found at a nearby site that indicated the tree had fallen into a live electrical line (presumably due to wind).  This started another fire that was ultimately absorbed into the main Camp Fire.

How Do Utility Lines Start Fires?

Utility lines are a challenging problem for fire prevention. In the state of California, PG&E has been found responsible for at least 1500 fires since 2014, which forced the investor-owned utility into bankruptcy.  The main hazard is arcing between energized lines or between lines and grounded objects.  This happens primarily in three ways:

Not all arcing results in fire; tree contact with transmission wires is a leading cause of power failures.  For this reason, utility lines nationwide must be kept clear of vegetation in accordance with state and federal regulations.  Federal regulations require that trees and bushes growing in or adjacent to a utility line right-of-way must be kept trimmed to prevent contact.

Tree service professionals would do well to exceed the bare minimums required in order to account for regrowth of pruned vegetation in the interval between maintenance cycles.  Additionally, vegetation can droop closer to power lines when blown by the wind, or weighed down by snow or ice.  It can also break off and fall onto power lines.

State requirements vary.  California Public Resource Code 4292 requires a minimum of 10 feet of vegetative clearance at the base of poles carrying certain protective equipment and connectors.  Trees near these same poles need to be limbed up to 8 feet.  This regulation applies to “State Responsibility Areas” in California, generally areas outside of city limits.  This is an advisable standard for other states as well, particularly in the west.

Vegetation Management in the Right-of-Way

As desirable as it may seem, it is not generally possible to keep areas under utility lines completely free of vegetation.  Weeds grow.  Blackberries get established.  The area in the right-of-way must be maintained, which requires money and persistence on the part of utility companies.  Directly under power lines the vegetation should be low-growing and not highly flammable species or “flashy” fuels such as grasses that readily ignite.

Recently there has been a push towards establishing plants used by pollinators and other sensitive species.  The Electric Power Research Institute has developed a Wild Bee Habitat GIS Mapping Tool to assist managers with developing habitat in utility right-of-ways.  In the intermediate zone of a right-of-way clearance, small trees or shrubs may grow.  At the outer edge of the clearance, trees should be removed that are dead or diseased, or taller than the distance to the utility line to prevent them from falling on lines.

While it may be difficult to imagine, wood utility poles can be more fire-safe than steel poles as steel under high heat can fail catastrophically.  A study by the US Forest Service’s Fire Science Laboratory found that where there is little vegetation, wood poles should be cleared to about 15 feet, but in a dense forest or brush field, vegetation should be cleared to a distance of about 60-90 feet to protect wood poles from ignition.

Tree service professionals could seek to become ISA-qualified utility line clearance arborists so that they could safely prune or remove vegetation near utility lines.  Additional information and resources regarding utility line clearance can be found through the Utility Arborist Association.   Arborists working within ten feet of energized utility lines are legally required to be certified.  Service wires running from electric poles to homes are not necessarily kept clear by utility companies and certified tree professionals could also offer this service.  Certified arborists could also bid for contracts with utility companies doing right-of-way clearance.  Given the continuing drought in the western United States, coupled with climate change, the need will certainly continue.

Additionally, utility line clearance professionals should carry the right tree service insurance coverage to protect their business in the event of an incident.